By joan on October 22, 2014 in Comfort Desserts, Rhubarb and Strawberry Recipes

This was my favorite rhubarb dessert when I was a kid. It wasn’t my Mom’s though, so I would rush out to the rhubarb patch and pick a bunch of rhubarb so as to convince her to make it. (I think this is the only reason I would ever go willingly to get anything from the garden.) We would have it with Carnation milk poured over top, or ice cream if we were really lucky. 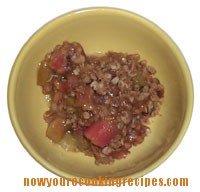